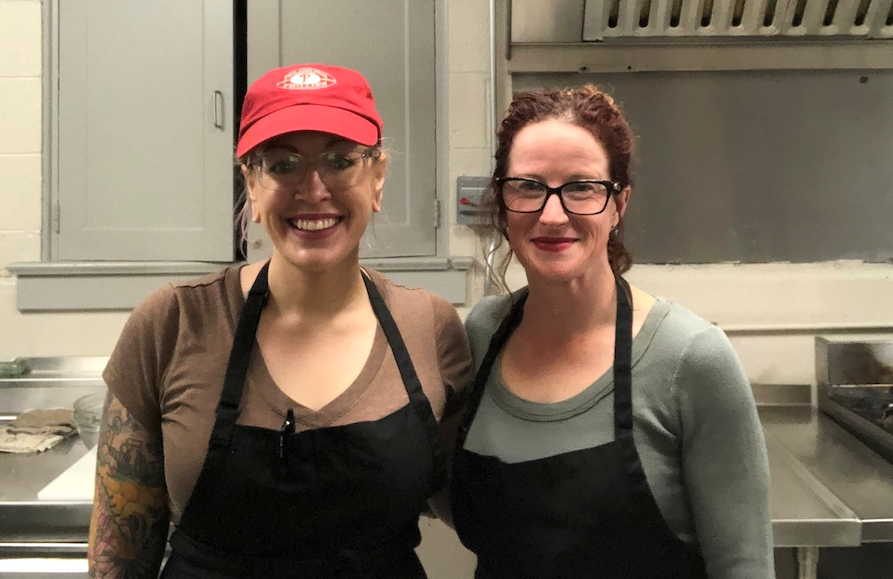 It was a tomato that made her break down and cry.

“I was living in Nashville, and I went to the market and didn’t even have enough money to buy a tomato,” says Voorhees native Margaux Murphy, thinking back to that low public moment. “It sucked and was humiliating.”

Still, she says, despite that and other times when she wasn’t sure how she’d eat, she had a roof over her head and people she could have asked for help.

Not everyone has that. “And for the people who fall between the cracks, our job is to help each other,” she says. “We’re supposed to uplift each other. It’s the whole Mister Rogers thing: In kindergarten, you learn to be nice to everybody, and later in life, none of that applies?”

Murphy simply won’t have it that way. On Christmas day in 2014, she launched Sunday Love Project, a nonprofit that serves between 600 and 800 meals a week—Sunday dinner, Monday brunch, Tuesday dinner— to Philadelphians struggling with homelessness. Murphy serves them at Church of the Holy Trinity, on 19th and Walnut streets, where she converts the basement into a dining room; she also pounds the pavement in Kensington to hand-deliver meals to the many residents with whom she’s built relationships.

“I live a mile from Kensington, and once you see that people are struggling and they’re hungry, it’s unacceptable,” she says. “They’re my people and I want to take care of them. I don’t want them to feel judged in any way.” Funding has come from financial and in-kind donations, as well as grants.

Now, Murphy is expanding her project to be about more than just feeding people who are homeless. Along with Lauren Hooks, formerly the director of kitchen operations for Vedge Restaurant Group, she wants to help them get jobs, so that they can feed themselves.

Murphy had expressed her desire to start a workplace re-entry program and after Hooks, a longtime veteran of the food industry, quit her job to start her own business, the first call she made was to Murphy. “I was working in the restaurant industry for so long and could barely get my head above water because I was so busy,” Hooks says. “I always wanted to help in some way.”

“Once you see that people are struggling and they’re hungry, it’s unacceptable,” Murphy says.

Hooks’ curriculum, which she launched in June, has her meeting with her students for three hours a week for eight weeks at the church kitchen, with the goal of preparing them to get their ServSafe certificate; the credential, for which the test alone costs $200, is required for employment in most restaurant kitchens.

Some of Hooks’ classes are strictly workshops on food safety—learning about pathogens and how to operate in a professional kitchen. The first actual in-kitchen lesson is knife-skill safety. The group picks a different recipe for each class, preparing and cooking it, then packing it up to get served at SLP’s meals or on the streets of Kensington.

After completing the course, students are then eligible to work, for $15 per hour, serving SLP meals. Hooks’ vision is to have her students work at SLP for eight weeks, then help place workers at restaurant kitchens throughout Philly, using her extensive network of contacts. “I want job placement to be somewhere where they’ll be understood to be training, where it will be a little bit gentler of an environment than some restaurant kitchens can be,” she says.

When, for example, the founder of Healthy Meals by Anna, a local meal delivery service, contacted Hooks saying she was looking to hire, Hooks sent her one of her students to fill the spot.

The first few cohorts of classes have been small, ranging from just two to four students; eight have signed up for the next round. To overcome travel barriers, students now get a Septa Key Card; to overcome scheduling conflicts, Hooks has been meeting individually with students who can’t make it at the designated class time.

Hooks does the work on a purely volunteer basis, while running her new mission-driven restaurant consulting business, Seedling Project Management; Murphy continues to juggle this new endeavor with her job cleaning houses two days a week. “Once you see the desperation on the streets, having less money really isn’t that big of a deal,” she says.

“This is an opportunity to say we believe in you,” Murphy says. “Most of the time it just takes a little push and somebody to believe in you, and then you’re off running.”

As uncomfortable as Murphy is asking for funds for Sunday Love Project, that’s what the program needs the most right now: donations to cover workers’ wages.

“We don’t want to tell people to go work for $8 an hour wherever they can—we want them to know they’re valued as human beings, and that they deserve more than that,” she says.

She welcomes donations of products in-person (at the church), via an Amazon WishList here, or via PayPal here.

On top of the re-entry program, Murphy has ramped up efforts to support Frankford High School, opening a food pantry to support Coach BIll Sytsma’s student-athletes, like the football players featured in a heartbreaking recent Inquirer report on student hunger. “We’re trying to alleviate the weekend struggle, to make sure that these kids don’t starve over the weekend,” she says.

She also partners with special education teacher Kristen DeGregorio; as part of their life-skills training, DeGregorio’s students prepare 50 bag lunches a week, which Murphy and DeGregorio then deliver on the streets of Kensington each Friday.

“We’re just trying to help people move in the right direction,” Murphy says. “These people don’t have anyone invested in them and to believe in them. They just get so used to being downtrodden or treated poorly by society, that they kind of give up. And this is an opportunity to say we believe in you. Most of the time it just takes a little push and somebody to believe in you, and then you’re off running.”