That’s the word from the Sunday Love Project, which is feeding people in the neighborhood daily. 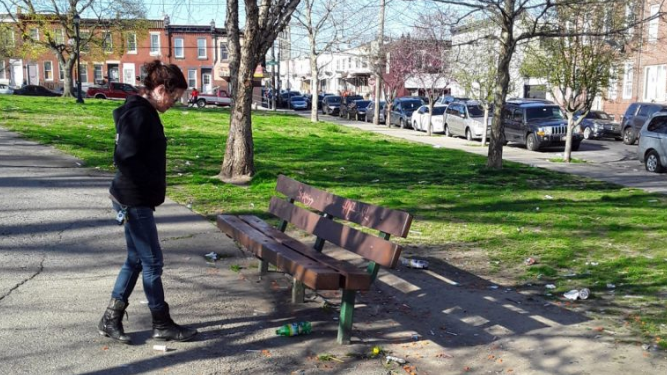 Margaux Murphy of the Sunday Love Project has been busier than during the pandemic, serving free meals to Philadelphians in need.

Many who rely on the grassroots hunger nonprofit’s daily visits to Kensington are drug users or people experiencing homelessness. Murphy said they appear to be having a harder time than usual — even as they disregard practices recommended to prevent coronavirus spread.

“Social distancing is a very difficult thing to understand out there, because a lot of these people are not completely aware of the news,” Murphy said. “Most don’t have TVs or smartphones, so they don’t understand the gravity of the situation.”

She sees people hugging often, and has also heard several rumors flying around.

Many on the streets are feeling invincible, Murphy said, and people have been telling her that the sex workers are busier than ever. “I’ve talked to a ton of people who were like, ‘If a virus takes me out — really?’ After everything they’ve been doing, they almost think they are immune.”

One specific false rumor getting passed around the Kensington grapevine is that people taking HIV meds are immune, Murphy said, “which is kind of terrifying.”

The HIV immunity rumor likely stems from President Trump’s repeated references to hydroxychloroquine, used to treat many immunodeficiency syndromes, as a potential “cure” for COVID-19. using the drug to treat the coronavirus is currently in clinical trials at Penn and other research centers, but results have not yet been proven.

Another problem in Kensington — as for people in many circumstances right now — is money.

Someone recently took a bunch of bananas Murphy was handing out and resold them to a corner store, she said. People are also reselling Narcan, the overdose reversal drug she gives out. And users who previously stole from Center City department stores on a regular basis tell her they’re striking out because nothing is open.

At the same time, many users who have places to stay are trying to stay home, only leaving their apartments or rowhouses to get drugs and food, Murphy said. Sunday Love has been giving out more food: up to 425 meals a day, versus 50 or 100 before the outbreak.

Murphy has also seen many folks in recovery fall back into drug use.

“I’ve been seeing [more people] relapsing in the last week, way more frequently than normal,” Murphy said. “I don’t know if there’s a connection between the coronavirus and the relapse… It’s getting a little worse every day. People are using way more than before.”

Word in the neighborhood is that the observed spike in use is because of people being let out of jail early, she said. But that’s another rumor — because it hasn’t happened.

Although there have been calls for Pennsylvania and Philadelphia to release nonviolent offenders to stop potential COVID-19 clusters from sprouting in close cell-block conditions, state, city and prison officials have maintained it’s not necessary at this time. As of Tuesday, 52 people in Philly jails had tested positive for the coronavirus, according to Health Commissioner Tom Farley.

Services still available for those who need help

Sitting Monday on the back of a bench outside the shuttered library in McPherson Park, also known as “Needle Park,” Murphy marveled at the increased amount of discarded drug paraphernalia scattered across the lawn.

She recalled sitting on that same bench a year ago with a good friend of hers.

“I saw him today, and he’s relapsed,” Murphy said. “The reason we were sitting on this bench [a year ago] is because we were at an opioid awareness walk, and they read the name of hundreds of people who passed away that year, and a lot of them were friends of ours. He promised he would never be one of those people.”

Sunday Love started more than 5 years ago when Murphy bought 12 meals from Boston Market to give out in Kensington and then went home to solicit help and donations on Facebook to do more.

Within a couple of years, she was serving meals once a week out of the Church of the Holy Trinity in Rittenhouse with a crew of volunteers. “But I decided that Kensington still needed a lot of attention,” Murphy said. She has been there every day since, distributing snacks and lunch bags that she and volunteers make.

Asked how she’s taking care of her own stress level and mental health as she works through the pandemic, Murphy said that “this is really hard” but that she is not alone.

“I don’t feel like the work is ever done, but I also feel like there are a lot of people who are willing to help, so I don’t have to shoulder the burden all by myself.”

The project is currently accepting donations at sundaylove.org.

Services are also still available at Prevention Point Philadelphia during the pandemic lockdown. Although drop-ins are no longer allowed, people can go there to get medications, mail supply and access the syringe exchange.

Operation in My Backyard is also still active in Kensington right now. the harm reduction advocacy group in Philadelphia provides “healthy meals, hygiene items, clothing, overdose prevention supplies and treatment referrals to individuals who are homeless and struggling with substance use disorders.”