On September 4, 2020, The Philadelphia Inquirer covered the closing of the homeless encampment on the Benjamin Franklin Parkway, quoting Margaux Murphy, founder of the Sunday Love Project. 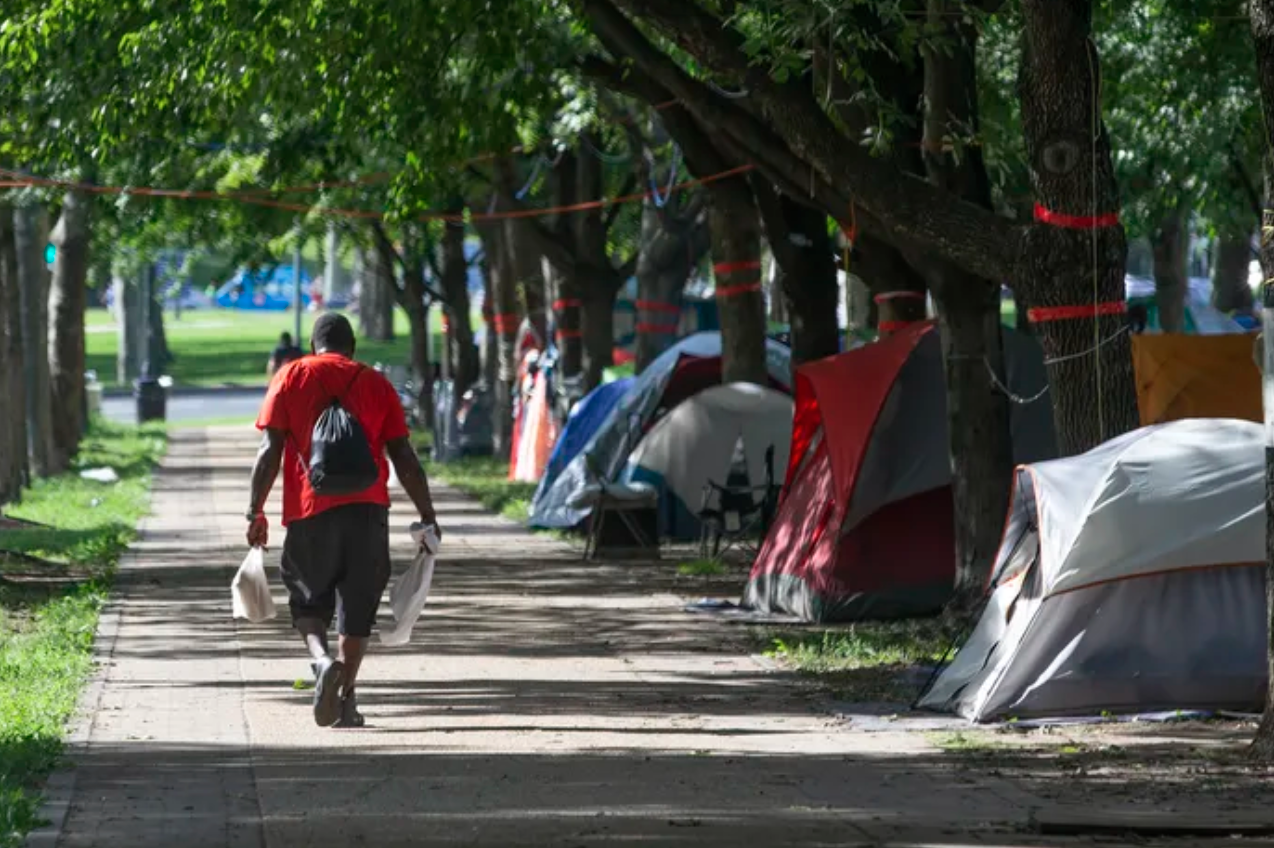 Philadelphia keeps clearing homeless encampments. But who is being helped?

The way Faith Burdick sees it, the encampment outside the Philadelphia Housing Authority headquarters in Sharswood saved her life.

Burdick, who has a heart condition that has nearly killed her three times, was standing on the corner near the encampment when she collapsed, and an older resident of the camp, Teddy Munson, rushed to her side. He helped her to the very lawn chair where she was sitting last week, ahead of a posted eviction date of Sept. 9. As she waited, organizers at this and a larger encampment on the Benjamin Franklin Parkway tried to negotiate with the city for an alternative to what’s become of a half dozen other encampments in the last few years — all closed through a program the city touts as a humane national model.

That model relies on persuading people to enter shelter rather than merely forcing them off the premises — but Burdick, 46, said she’d tried taking them up on it and wasn’t sold. Though her nine months on the street had brought gunpoint robbery, rape, and hunger, the shelter seemed worse. It was too far from her doctors, and it too felt unsafe. Within two weeks, she was back at the encampment.

The number of homeless encampments nationwide has increased tenfold since before the recession, an analysis by the National Law Center on Homelessness and Poverty found. And the encampments, which started in June and have drawn more than 100 residents to intentionally prominent (and controversial) sites, have forced a larger conversation in Philadelphia. Now, shutting them down won’t be simple: They’ve resisted two previous eviction orders with volunteer defense teams and legal petitions. The city also says they’ve prevented outreach workers from entering.

But while some say closing encampments is just necessary to protecting public space and preserving order, critics describe it as “squeezing a balloon” — moving people from one location to another, without addressing underlying causes. Philadelphia has already closed three encampments this year, despite guidance from the Centers for Disease Control and Prevention that doing so during the pandemic poses a public-health threat — a concern echoed by local experts, who have urged the city to leave current camps intact.

Mike Dunn, a spokesperson for the city, said in an email there is a larger strategy at play that has connected half of those leaving encampments with city services.

“The city has used the encampment resolution to expand long-term housing opportunities, which is the solution to homelessness,” he wrote, adding that 115 people in the encampments already have moved into shelter. He said 34 more applied to a new “street-to-home” rapid-rehousing pilot that will provide 24 months of rental subsidies.

Some are skeptical, though.

“I think they’re trying to alleviate the problem by not having the people visible,” said Margaux Murphy, whose Sunday Love Project serves meals in Kensington and Center City. And she worries about those who are moved into housing without adequate services — putting them at greater risk, for instance, of overdosing alone.

“It’s all about optics,” said Stephanie Sena, a professor of poverty and policy at Villanova University. “The city will do whatever it can to get people away from the encampment, but often it’s only temporary.”

What’s playing out on the Parkway and in Sharswood is just the latest chapter in Philadelphia’s decades-long struggle to manage how and where people live on the street.

Going back to the 1990s, the city leaned on “defensive design,” like installing wrought-iron gates to stop people sleeping on the sheltered steps of the old Family Court building; enforcement of Fairmount Park’s 1 a.m. curfew to push people off the Parkway’s green spaces; and a mix of shelter placements and threats to clear hundreds out of the underground subway concourses.

In 2012, officials tried banning volunteers from serving meals outside on the Parkway — though church groups sued to overturn that ban and won.

The current approach was pioneered in Kensington, where the city closed the infamous El Campamento that was tucked into a railroad gulch in 2017 — but four new encampments sprouted in its place, clinging to nearby underpasses.

That’s when the city developed what it calls its “encampment resolution” process, promising a social-service approach rather than a police-led one. Outreach workers compile a list of residents and identify beds for everyone, plus storage for their stuff. The city also set up “navigation centers” in Kensington: low-barrier shelters with no sobriety requirements or curfews, designed to transition people into treatment or permanent housing. The city has touted the success of the process: About two-thirds of those displaced accepted services, housing, or both. A year later, 48% were still housed.

But, a city-commissioned study found that, even as people were moved into housing, the encampments didn’t shrink. Meanwhile, the number of unsheltered people in Kensington increased “to an unprecedented 700.″

Stephen Metraux, a University of Delaware professor who cowrote that study, said it speaks to a problem clearing encampments won’t solve.

“The solutions are structural,” he said. “You need a lot more housing than is currently available. So in the short term, solutions need to be a lot more creative. There’s been talk of tiny homes, of sanctioned camps, of longer-term arrangements that aren’t ideal but at least buy people time.”

To Casey O’Donnell, who heads the Kensington nonprofit Impact Services, it’s hard to say what clearing the encampments accomplished, in the face of the larger, intersecting problems of homelessness and addiction. What he calls “fluid encampments” remain scattered through the neighborhood. “They get chased away and cleaned up, and then they come back.”

Looking at a place like Emerald Street, “the encampment is no longer there — but if you travel north two blocks and look at the conditions there for residents, for the people in addiction and for the guys selling narcotics, you don’t get any sense of improvement.”

A tug of war

Back on the Parkway, the encampment stands as a protest — for the right to housing, and against the sweeps that this year have cleared people off Vine Street, away from the Convention Center, out of the airport.

Some homeless-service providers say the encampments don’t necessarily reflect a systemic failure, and dismantling them is necessary to restoring order.

Jeremy Montgomery, who runs the shelter Sunday Breakfast Rescue Mission, said he’s now at 25% capacity. He said people have left the shelter for the encampment, hoping to jump the line for permanent housing.

In Montgomery’s view, there’s an important distinction between Philadelphia and West Coast cities where semipermanent encampments are sanctioned and supported. “Those cities have no other place for them to go. That’s not the situation in Philadelphia. There are sufficient numbers of shelter beds that are an option — that individuals in encampments refuse.”

Paul Levy, chief executive of Center City District — which last year began partnering with Project HOME to conduct outreach in Center City — said this tug of war is about “balance.” Before the encampment resolution there, the Convention Center was spending hundreds of thousands of dollars each year cleaning debris from the homeless encampment, a situation he said was neither humane nor sustainable. The resolution got many of those people to come indoors at last, he said.

He acknowledged that represents a fraction of the 500 or 600 people sleeping unsheltered in Center City on a given night, and that closing an encampment puts strains on the entire system. “There is a risk when you set aside a lot of beds for an encampment, other people have to wait longer. It’s not a perfect system. Resources are scarce,” he said.

Encampment resolutions tend to be reactive. Service providers would like to see something proactive, innovative: a treatment campus, O’Donnell suggests. Tiny houses, Sena proposes. A rapid inventory and reuse of the city’s thousands of vacant properties, advises Michael Hinson, the chief executive of emergency-shelter provider SELF. The Convention Center kicked in $500,000 toward creating the PHLCares Fund, which proposes a business-led solution to homelessness.

“We have to do everything in our power to bring more permanent housing solutions and do it with the understanding that people still want to create community with each other,” Hinson said.

For now, back at the Sharswood encampment, Kenneth McCain, 51, said though he has nowhere to go, no income, not even a photo ID, he’s getting ready to pack up and leave on his own.

“I don’t want to get into a fight with the police and end up in jail.”

Metraux said he’s watching to see what happens next.

“My prediction is a couple of months from now we’ll see another camp, regardless of how this situation resolves. It will be a different location, a different set of circumstances, and we’ll be having this conversation all over again.”