The shutdown, ostensibly because of zoning issues, is a loss to many in the neighborhood. 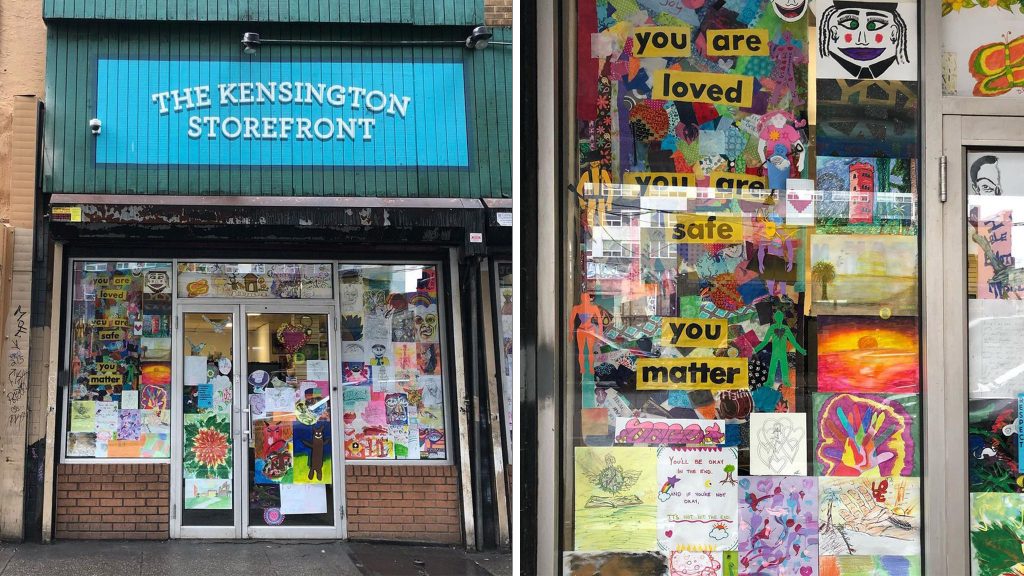 After four years providing an arts sanctuary in a neighborhood battling opioid use and homelessness, the Kensington Storefront has closed its doors for good. Mural Arts, which ran the center in partnership with the city, attributed the shutdown to “a perfect storm of zoning restrictions and COVID.”

Though virtual programming will continue, and a search for a replacement space is underway, the loss is causing grief among the community, which had come to depend on it as a beacon of hope.

“I don’t have the words or the ability to clearly speak about the closing of the Storefront right now,” artist Lisa Kelley wrote in an email. Her work “Epidemic Weavings” was one of its primary installations.

The arts center was located in the shadow of Somerset Station, the Market-Frankford Line stop recently shuttered for cleaning and repairs to elevators damaged by a glut of used syringes and urine, according to SEPTA. After outcry among neighbors, the station will reopen this week, earlier than anticipated.

Amid the swirling situation, the Storefront served as a safe space for people experiencing homelessness and/or substance use disorders, participants and organizers said — a place to escape the elements, get something to eat, make art, and find support.

“You know how grass grows between the cracks in the sidewalk? There’s life there. But it will never be part of a lawn. The people here are like that grass. The Storefront was their lawn.”

Mural Arts founder and executive director Jane Golden said the organization is grieving along with the community. “I completely understand and empathize. It was a really special space. It was a space of creativity,” she said. “It was a bright spot in what seemed like a sea of despair.”

The original space at 2774 Kensington Ave. had apparently never gotten approval to operate as a community center, Golden said, adding that the information only recently came to light.

While the Storefront’s location did carry the appropriate CMX 2.5 zoning designation, “a community center is allowed by special exception, not by right,” a city spokesperson clarified.

However, if an effort is made to get that exception — via application to the Zoning Board of Adjustment — it’s up to the community to show that the community center would have “detrimental” impacts on the neighborhood, according to Philadelphia zoning code.

It’s unclear why the issue never came up previously in the years since the Storefront’s 2017 launch. The center was an initiative of Porch Light, an ongoing partnership between Mural Arts and the city’s Department of Behavioral Health and Intellectual disAbility Services.

“Anybody could wander in [to the Storefront], and the vibe was so good,” said Margaux Murphy of the Sunday Love Project. “You just felt loved the minute you walked in… It’s a loss.”

Murphy has dedicated much of her day-to-day life to bringing food and care to people experiencing hardship in Kensington, where more than 40% of residents live below the federal poverty line and the open market for opioids wasn’t slowed by the pandemic.

“I don’t understand (actually I clearly do) why people would want this bastion of creativity, support and understanding to not be here with all that is plaguing the community,” Clayton Ade-Andrew Ruley, a social worker in the neighborhood, posted about the shutdown. “How do you expect people to get help without providing places that help? I’m saddened that helping tremendously marginalized people is only political to some.”

The Storefront’s programming, which previously included weekly “Tuesday Tea and Textiles” gatherings and various other workshops, was put on hold during the pandemic to comply with city safety regulations, according to Mural Arts executive director Golden, adding that “artists did keep using the space [to] do some prep work, to store things.”

Mural Arts worked to keep artists employed during COVID, Golden added, by creating informational space pads and signage for the city’s food distribution sites, hosting online memorial services, designing postcards to send to nursing homes and hospitals, and working on murals to brighten the neighborhood when retail stores were shut down.

The organization is “100 percent committed to opening another Storefront” in Kensington, Golden said, hopefully one that’s larger and has a small yard to allow gardening.

Golden is meeting this Monday with a real estate agent about one possible location, she said, “so I’m really excited.”