Frankford Football seeks to fight violence and feed students, with a little help from Sunday Love

Frankford coach Bill Sytsma and former Imhotep coach Nick Lincoln work with Beyond the Field, a program that helps kids replace football by keeping them safe from street violence. 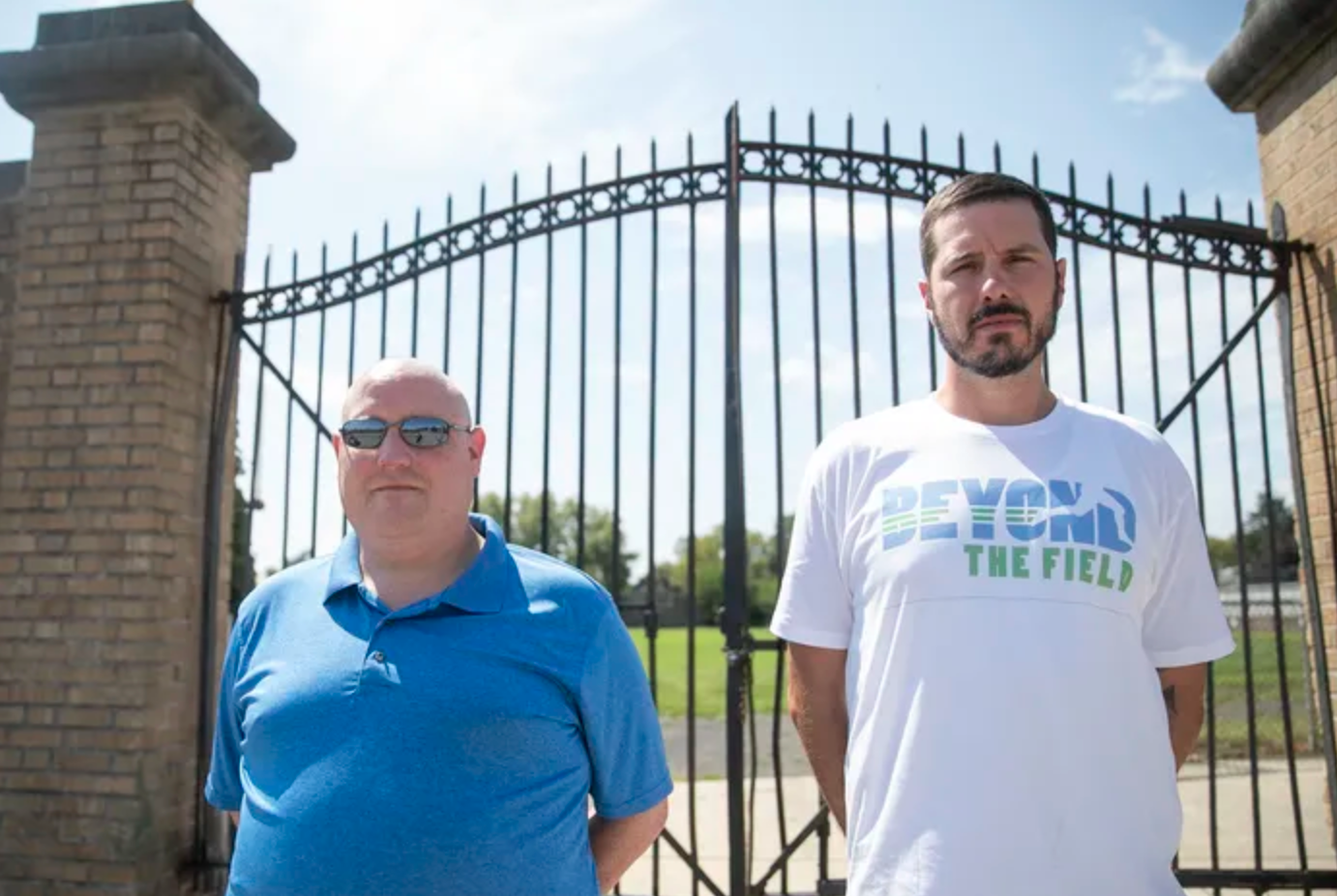 Bill Sytsma knows worry well. It often comes at night, as in almost every night, for the 42-year-old Frankford High School football coach.

Young people killed by gun violence in Philadelphia isn’t a new phenomenon, so Sytsma isn’t the only area coach who knows – or has known – worry’s familiar feel.

Worry is also why Sytsma and his team have a group-text chain that functions as a check-in and early-warning system. So when his phone pinged aloud around midnight on July 5, the fourth-year Frankford coach was already awake and firmly within worry’s grasp well before he pawed for his cell phone.

“Kinda like any time it goes off at night,” he said, “you’re thinking, ‘Did something happen?’ ”

Shortly after 8 p.m. on July 5, sunlight dwindling, 15-year-old Angelo Walker was shot while riding his bike not far from his home in Overbrook. He died hours later at Lankenau Medical Center.

Nicknamed “Rooskie” by his junior varsity coach, Angelo would have been a sophomore at Frankford this season. That same season was postponed, due to the COVID-19 pandemic, by various leagues in Southeastern Pennsylvania, leaving a void that Sytsma feared had already endangered his players since schools closed in March.

Just past midnight on July 6, several frantic texts eventually confirmed that Walker’s life had been cut short. Soon after, Sytsma’s phone beckoned again. This time, however, it was a call from a former rival, Nick Lincoln, a coach who also knew worry well.

Last week, the unlikely duo – with help from the Ertz Family Foundation and others – became teammates in a program partnered with Open Door Abuse Awareness Prevention, a violence prevention program for youth. Lincoln had worked with ODAAP in the past and is now its chief program officer.

The newest program, Beyond the Field, is designed to provide high school football players with weekly football-related workouts and leadership training within CDC-recommended guidelines, all to help replace the routines of a typical football season that many believe literally keeps players “off the street” and safe from violence.

Nick Lincoln, 35, twice has spoken at the funerals of his players.

Lincoln coached Penn Wood for three seasons before returning in 2017 to lead Imhotep, where he had spent four seasons under coach Albie Crosby. Crosby had built the Panthers into a perennial Public League power and added the program’s only PIAA championship in 2015 despite the sparsest of accommodations, including a practice field with grass so high it often obscured the cleats directly beneath the players who wore them.

In September 2019, the teams from Imhotep and Gratz both fled the field after gunfire erupted just outside the Gratz Supersite in the Nicetown section of Philadelphia. Fans fled the stands and ran across the field during the second quarter of the highly anticipated Friday night contest. No one from either team was injured, but a 14- and 15-year-old in attendance were wounded.

Those experiences meant Lincoln knew exactly what Sytsma was about to face when he called the Frankford coach in July.

“[Bill] said I was his first call,” Lincoln said in a phone interview. “I just knew that he was gonna be dealing with like 50 kids who were gonna be hurting.”

Lincoln had continued Imhotep’s dominance of the Public League and even led the Panthers to a state title berth in 2018. He resigned in January, announcing via Twitter his intention to pursue college coaching.

In March, he announced that he had joined Division III Delaware Valley University as its quarterbacks coach.

Violence and its aftermath, however, remained on his mind. Lincoln said he just didn’t know what to do with the thoughts.

He eventually had an idea during a meeting held by Philadelphia CeaseFire, a gun-violence prevention program that utilizes a public-health model called Cure Violence. In mid-March, Lincoln invited every coach he knew, rivals included, to a subsequent CeaseFire call via Zoom. About 40 area coaches attended, he said. Some even shared their experiences with players who had died, were injured, or had dealt with violent circumstances. It gave the meeting, he says, an unintended therapeutic feel.

“We’ve all been going through the same stuff,” Lincoln said, “but none of us really talk about it because we’re all competitive.”

Sytsma and Lincoln, alone, have experienced the shooting deaths of six players [three apiece] since 2016.

Sytsma, who was on the Zoom call, said the coaches selected players to represent their teams in subsequent calls so that adults could hear perspectives directly from the players. The calls with players continued periodically throughout the summer.

For Sytsma, partnering with Lincoln was unimaginable before that initial call.

“I couldn’t stand the guy up until March,” Sytsma said, bursting into laughter. “He coached at Imhotep. No bones about it. That was my enemy. Now, we’re teamed up, literally. I have a new respect for the man, definitely.”

In July, Lincoln and a group of coaches and players gathered in front of the Octavius Catto statue near City Hall to “call out our leadership and our community to take a stand together and come with solutions.”

Lisa Ertz, mother of four sons, including the oldest, whom she calls Zachary – the Eagles’ starting tight end – saw the gathering on social media.

“They put their whole hearts and souls into these kids,” Lisa Ertz said of the coaches in a phone interview. “It’s really amazing and inspiring.”

The Ertz Family Foundation, she says, is a financial supporter of Beyond the Field. The foundation, she added, has also connected with local businesses that have donated water, supplies, and other items.

It turns out, the community had also previously responded in support of high school sports in Philadelphia.

In a phone interview, Margaux Murphy, founder of the Sunday Love Project, said she learned about Sytsma’s quest to protect and feed his players from an Inquirer article last year. Shortly after the story was published, her nonprofit, with a mission “to share food” and build community, contacted Sytsma and has been collecting food for his players ever since.

The Frankford coach enlisted volunteers to deliver the food to his players’ homes. After schools closed in March, Sytsma says he had so many volunteers that he put them in a rotation. One volunteer, both Sytsma and Murphy said, was 76ers guard Matisse Thybulle. He delivered food to players’ homes before the Sixers resumed their season in the NBA’s “bubble” in Florida.

At its peak, Sytsma said, the deliveries went to more than 30 families. Deliveries still occur, but Murphy says the number of families has decreased.

John Davidson, Mastery North High School football coach and assistant principal, typically provided food for his players before and after every game. Suhail Gillard, one of Davidson’s most talented students and athletes, was accidentally shot and killed by his twin brother in 2019.

Sankofa basketball coach Isaiah Thomas, also a city councilman, has helped to facilitate a meeting between Beyond the Field organizers and state entities such as the Department of Health, to ensure proper guidelines are followed.

A hero, a highlight, and a hardship

In July, Lincoln and ODAAP founder and CEO Valencia Peterson attended the socially distanced memorial service for Walker that took place at Frankford’s football field. Sytsma and his team released red, blue, and gold balloons – the school’s colors – in Walker’s honor. His family, Sytsma said, also received Walker’s No. 17 football jersey and a football signed by the team.

After the service, Lincoln and Peterson invited the players to a weekend retreat. They coordinated the logistics with parents and arranged transportation to the campground in Honey Brook, Pa., just outside Coatesville. The players swam, canoed, played games, and had time to “just be kids,” Lincoln said.

As a bonfire crackled that first night, Lincoln said the players were also asked to share a “hero, a highlight, and a hardship” from their lives.

“There are kids that are just dealing with so much, and I’m not sure they always have a place where they feel comfortable sharing,” Lincoln said. “I don’t know if it was just the day or the environment, but they really opened their hearts up. It was pretty powerful.”

It’s no coincidence that group discussions about leadership, conflict resolution, coping strategies, and preparation for the future are also planned as part of Beyond the Field.

Lincoln said football-related instruction, such as position drills and skills training, is also planned. A few former players with college football experience, he added, are among the volunteer instructors.

One of the ultimate goals, both Lincoln and Sytsma said, is to empower leaders who can then mentor younger people.

“If we wait until kids reach high school,” Sytsma said, “it might be too late. They may have already chosen a negative path.”

Frankford quarterback Anthony Torres, 15, is the same age that Angelo Walker was when he was killed. Torres, a sophomore, is in the same grade Walker was denied. Torres had transferred from Boys’ Latin last fall, so he didn’t know Walker well.

Sytsma chose Torres to represent Frankford on the CeaseFire Zoom calls this summer.

Torres has three younger siblings whom his father, Anthony Torres Sr., and mother, Tiffany, say he needs to show “the right way.” It only made sense to do the same for younger generations of football players.

“As players,” Torres said during a phone interview, “we wanted to [partner] with little league teams to show the kids that we cared about them.”

Torres said Beyond the Field could also help just by keeping kids “off the street,” which, when asked to clarify, he explained was meant literally.

“At any moment anything can happen,” Torres said. “Just the simple fact that [Angelo] was just riding his bike [on the street] in his own neighborhood.”

Marcus Serrano, 18, said he’s known about six people his own age who were killed by gun violence. Two adults, both like father figures, he said, were also killed.

Serrano graduated from Frankford last year. He was among the players who gathered in Frankford’s locker room on Friday nights.

“We were playing board games just to keep everybody off the street,” Serrano said.

Serrano played only one full season of high school football because of injuries and a since-resolved medical condition, he said. It was enough time, however, to earn a football scholarship to Division II Seton Hill University in Greensburg, Pa.

“I feel like I can motivate a lot of kids,” Serrano said in a phone interview. “[Some] give up too quickly. I earned a Division II scholarship in one season.”

Serrano, who has played the piano since middle school, also participated in Walker’s memorial service before he left for college. At the service, he played a version of Andra Day’s song, Rise Up.

Serrano explained how football – and Sytsma – also motivated him to improve his grades.

So, sometimes when Sytsma’s phone beckons, it’s not just worry on the other end.

“It makes me happy,” Sytsma said. “It makes me proud. Serrano FaceTimed me last week. It was his first time on campus. He walked around campus and gave me a virtual tour.”